of Serious Thoughts: Butterflies: This month it seems that we all need some lightness . . . so I’m going with my butterflies.     I have milkweed growing near my house.      ...
Posted by B. Sabonis-Chafee at 9:08 AM No comments:

of Serious Thoughts: World in Distress

of Serious Thoughts: World in Distress: Our world is in distress.     We have experienced unprecedented life-threatening high temperatures in the 100’s for days on end.      Drough...
Posted by B. Sabonis-Chafee at 7:04 PM No comments:

This month it seems that we all need some lightness . . . so I’m going with my butterflies.  I have milkweed growing near my house.   A few years ago I noticed several Monarch caterpillars on the leaves (Monarch caterpillars eat only milkweed) and I decided to watch them develop.  The next day when I went out to see them, there were only two left . . . the birds must have gotten them.  I decided to take the remaining two to the safety of my house.  In a tall clear container I put a cut stem of milkweed in a cup of water—it became their nursery.  Each time they had eaten most of the leaves I replaced them and I watched them grow fat. To my delight within the month I had hatched and released two butterflies.

This year my daughter, Lisa, sent me a butterfly cage—who knew there was such a thing?  Amazon has everything.  I was lucky enough to find 8 caterpillars (one didn’t make it).  I charted their time between my finding each, and their chrysalis formation. 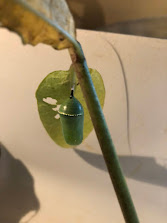 It varied from 7 to 10 days (didn’t know how old each was when found).  Their chrysalises are beautiful—pale green dotted with gold beads.  They emerge in from 10 to 14 days.  They then need at least 2 hours for their wings to completely dry.

After a week from the first chrysalis, each morning I awoke to check the butterfly cage.  On two successive mornings there were butterflies and the others emerged throughout successive days.  I allowed them the almost two hours to dry and on nice days they rode on my finger to the flowers. 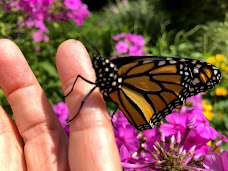 The two that emerged at night, having more than two hours to dry, were anxious and flew off as soon as they got outside.

It was a delightful and rewarding experience.  I plan to do the same each future summer. 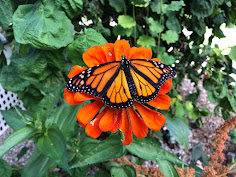 Posted by B. Sabonis-Chafee at 6:35 PM No comments:

Our world is in distress.  We have experienced unprecedented life-threatening high temperatures in the 100’s for days on end.   Droughts, fires and floods have resulted in unparalleled destruction and loss of lives.  Rivers, lakes and streams and oceans as well as lands and the air are all polluted.   We see a degradation of the food chain from overuse of antibiotics and chemicals.   This past year has brought a plague of deaths from a new virus and the flagrant rash of ‘recreational’ drug use.  Nations don’t know how to manage the onslaught of millions of refugees all over the globe fleeing drought devastated lands, tyrannical leaders and uncontrolled crime.  This is our world in the 21st century.

the earth is pinning, withering,

the heavens are pining away with the earth.

The earth is defiled under its inhabitants’ feet,

for they have transgressed the law,

So a curse consumes the earth

And its inhabitants suffer the penalty.

Those are words prophesized by Isaiah over three thousand years ago . . . and it tells of our world today.  Isaiah describes it as God’s wrath.  Each age describes reality in the terms that are available to their understanding.  The ancients believed God directly controlled everything.  Their idea of God was that of a harsh, demanding and controlling Deity—much in line with the rulers of the times.  So in prophesying a world disaster he attributed it as being the curse of God punishing humanity.

God’s covenant to man was to shepherd the earth.  We were given control.

Jesus introduced a new view of God, as the God of Love who desires and awaits mankind to choose ‘the good’.   Jesus did not demand and command, rather he demonstrated love with stories of kindness and lessons like the beatitudes, and he left it to his followers to choose to accept or reject.  In Deuteronomy, God’s words are reported as “I have set before you, life and death, blessings and curses.  Now choose life so that you and your children may live.”  Not a command or demand, but a choice.

As religions grew, particularly Judaism and Christianity, they were structured more in line with  the Old Testament God of wrath and control.  The New Testament view of God, is of a God of love as demonstrated by Jesus.  Religions do not clearly convey the difference.

Since the mid-20th century there has been a decline in religious participation as science showed us another side of existence and it seemed less likely that God was controlling what was happening on earth.  Many came to think that meant there wasn’t a God.  Materialism and consumerism grew, and God was left out of the equation.  That was the mistake!  It’s not that God isn’t, it that God gave humanity a directive, “I lay before you life and death, choose life.” God watches and waits for humanity to choose ‘the good’ that leads to life.

In today’s world most people recognize that God is not controlling our actions.  Humans were given consciousness and free will.  That means we are expected to see, think and choose the course of action.  Unfortunately we have not chosen to follow the laws laid out at the beginning of time ‘to shepherd the earth’, which means we were to guard and protect it;  instead we have chosen to exploit it for selfish ends.  We have been directed to ‘love one another’; instead we divide into camps of ‘us’ and ‘them’ and fight each other.  We are instructed to share and to care for the poor and needy, instead we accumulate for ourselves—and the world became lop-sided with one percent of the extremely wealthy holding as much wealth as the poorer half of the world.

The climate crisis is not ‘God’s wrath’ punishing us; it is the result of the careless abandoning of principles and laws of justice inherent in ‘choosing life’.  In the process we have broken God’s covenant to shepherd the earth.  It is not God’s wrath we are facing.  It is the result of our own choices; we have chosen for death—and we, the inhabitants, are suffering the penalty.

We still have time to choose the other option.  But that requires us to recognize our One World and work together to save it from those selfish choices we have made that got us to this point.

Posted by B. Sabonis-Chafee at 8:43 AM No comments:

of Serious Thoughts: Modern Day Pharisees:   I was shocked and appalled when I read in the Washington Post that my church, the Catholic Church, was taking steps–officially—to make Com...
Posted by B. Sabonis-Chafee at 8:09 AM No comments:

I was shocked and appalled when I read in the Washington Post that my church, the Catholic Church, was taking steps–officially—to make Communion a political issue.  That is wrong on two fronts: 1) our constitution clearly mandates the separation of church and state, and 2) I have always heard it stated that the Church does not take a political position.

Lately, within the Church I’ve seen contradictions to the second point.  Here, in my blog of August 28, 2020 I posted Protesting The ‘Catholic Vote’ which was about the organization by that name.  It clearly takes a pro-Trump/anti-democratic stand, and its objective is to influence Catholics to vote that way.  The official church raised no objections to it.  This present issue again shows that same bias—the official church is trying to weaponize the Eucharist.  This past week, US Catholic bishops voted to back measures to limit Communion to politicians who support abortion rights.  That is specifically aimed at our President Biden who is a Catholic.  The ultra-conservatives in power have pushed it this far—following that intense election campaign to bring the vote to Trump which didn't happen, it now seeks to ‘punish Biden’.

They will of course deny that, yet this move is trying to limit who is ‘good enough’ to receive communion.  Who IS ‘good enough’?  The Catholic Church has once again become a body which, in his day, Jesus called the ‘teachers of the laws and the Pharisees . . . who shut the kingdom of heaven in men’s faces.’  (Matthew was pretty strong on that point.)

God’s greatest gift to humankind was free will; with it each individual is responsible for the choices he/she makes.  One’s own conscience is the final determinate.  Jesus did not command or demand, he respected one’s free will.  When Jesus sat at the table with his disciples on Holy Thursday he knew his betrayer, yet he offered him the cup and bread along with the others.  Jesus does not demand or command, he demonstrates Truth and leaves the choice to the individual.       . . . If the bishops are followers of Jesus, they should pay better attention to that!

Posted by B. Sabonis-Chafee at 7:30 PM No comments:

of Serious Thoughts: Humanity's Wake-Up Call:   The 21 st   Century calls humanity to awaken to the perilous path it walks. There is order to life and existence.  On its own, the natural...
Posted by B. Sabonis-Chafee at 9:08 AM No comments:

B. Sabonis-Chafee
Author: "The Stations", B. Sabonis-Chafee
Who am I? Here is the sum of my pertinent information: I’ve raised a family of 4 children, each of whom turned out to be thoughtful, caring, compassionate and successful human beings thus adding to the plus side of humanity. I’ve earned 3 degrees; which led me to work as an Occupational Therapist, Psychologist/ Counselor, and Community College teacher after which I retired to travel and teach in ESL (English as a Second Language) programs in 3 countries: Haiti, Kazakhstan and Thailand. The focus of my life-long studies: psychology, philosophy, theology and spirituality. I write: poems, essays, stories, and stray thoughts; Many of these are captured in my journals, one per year since 1963, plus prayer journals since 1982.